As we begin to emerge from COVID 19, many school districts are returning to the core question of school facilities needs.  Where does your district stand?  More importantly, can you meet all your needs passing just ONE bond? If you’re like most districts in California, you’ll probably need to employ a “multiple-bond over multiple years” strategy.

Passage of school bonds in 2006 and 2016 were relatively easy to achieve.  Blessed with a pro-education electorate, both those earlier campaigns earned among the highest voter support and passage rates in the state.  However, no matter how fast GFUSD built classrooms to meet growing enrollment, the overcrowding issues continued…and a new challenge emerged:  as new school facilities opened and portables were added, existing school facilities were growing old and deteriorating.  Facilities planning had long been a necessity and a priority – but the stakes were rising.  By late 2019, GFUSD leaders decided it was time to accelerate planning and move to pursue yet another (3rd) school bond measure.

Enter CliffordMoss.  After previously guiding bonds 1 and 2 in 2006 and 2016, CliffordMoss was well positioned to help the District assess the feasibility of a 3rd bond story of need and navigate the unique 2020 election cycle. In 2019 and early 2020 and with help from CliffordMoss, GFUSD embarked on an extensive early listening initiative with stakeholders throughout the district. In the process, they touched thousands of parents, teachers, staff, local opinion leaders and, most importantly, GFUSD voters. A survey mailer was sent to GFUSD parents and residents in an effort to gauge which upgrades and improvements were most important to the community. Being mindful of the high volume of Spanish-speaking residents in the co 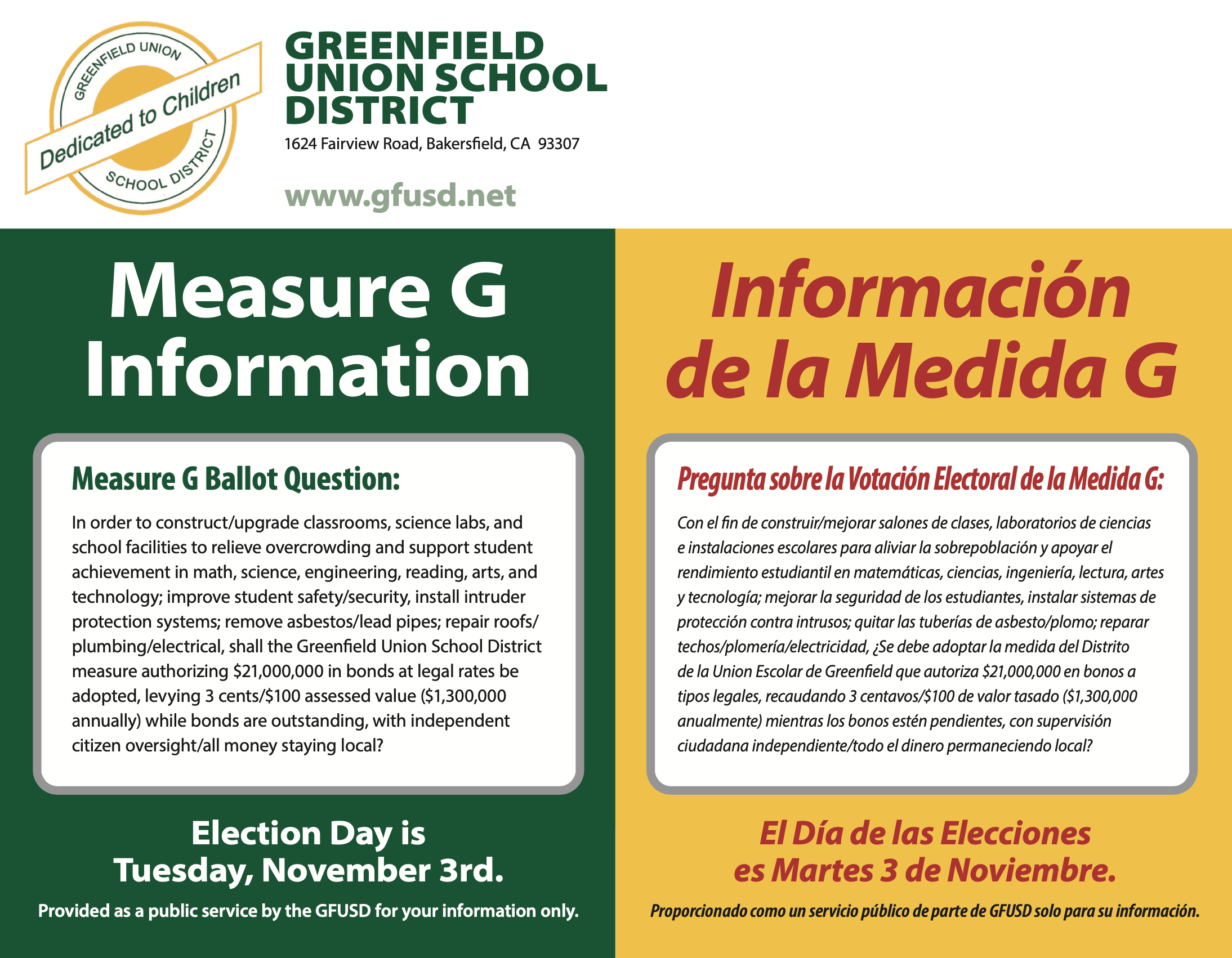 mmunity, communications efforts to voters were sent in both English and Spanish.

Then COVID-19 arrived.  The pandemic created a whole new set of unexpected and unwanted challenges.  The District had to quickly reset and focus completely on the transition to virtual/distance learning when schools closed in March.  Fortunately though, District leaders never lost sight of the critical importance of returning to the ballot to secure new funding to ensure the next set of school upgrades. As summer approached, the focus shifted back towards a 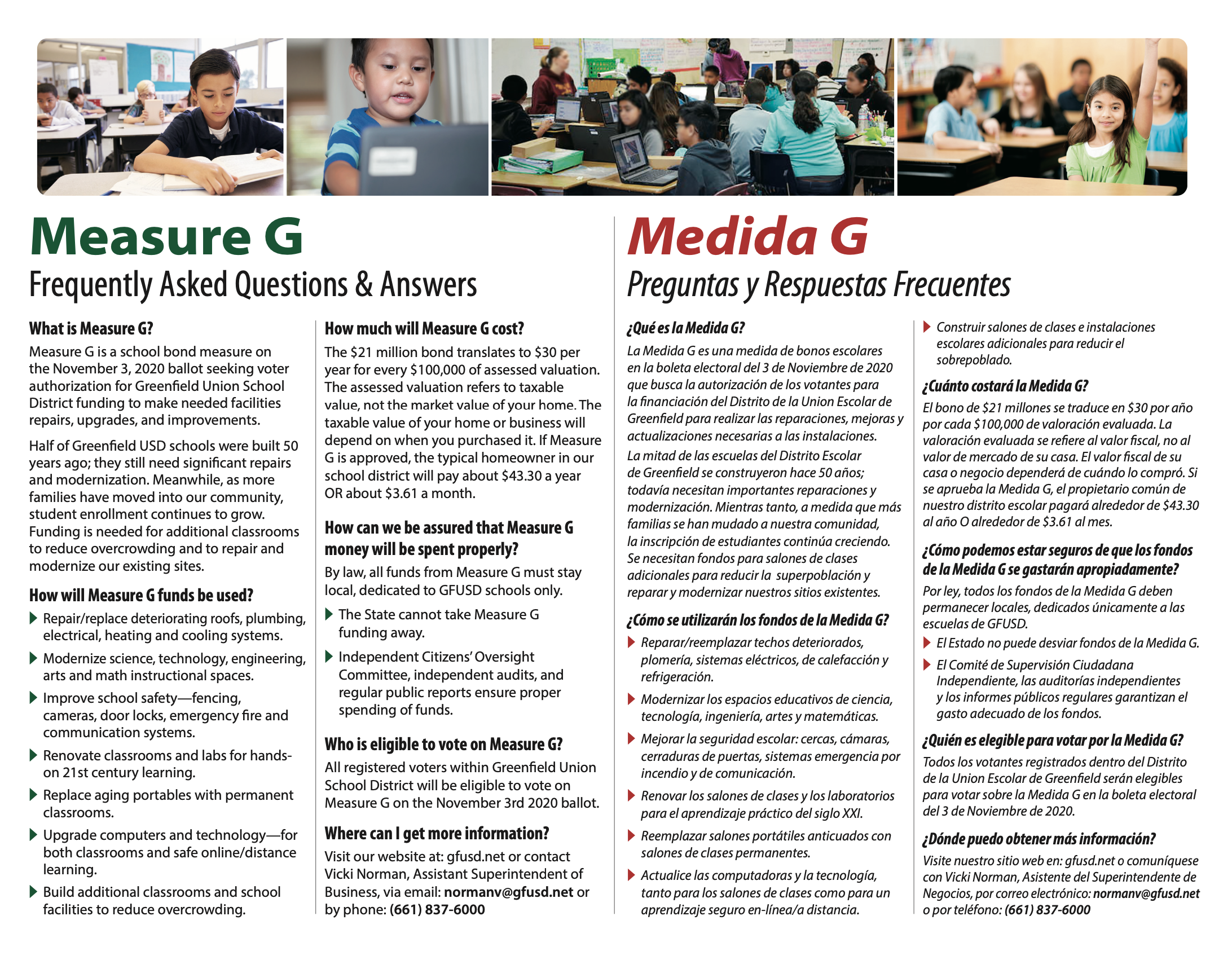 potential bond measure. Despite the poor results for school bonds across the state in the March Primary Election, GFUSD polling showed continued voter support for localGreenfield schools. GFUSD made the (correct) decision to push ahead and place a bond measure on the November General Election ballot.  Significant effort was invested in “right-sizing” the District’s ballot measure – i.e. not asking for too much or too little, rather, seeking what GFUSD truly needed to make a difference in upgrading existing schools and continuing to relieve overcrowding with new school facilities.

The measure that emerged, Measure G, was a $21 million bond with a tax rate 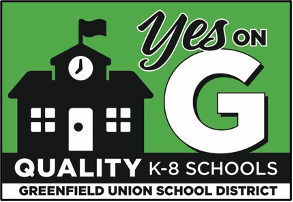 of $30 per $100k assessed valuation. CliffordMoss was then hired by the small but might campaign team to immediately developed a strategy to lead the campaign to victory in the unpredictable COVID-19 era. The environment was demanding with HUGE turnout expected on a Presidential ballot, requiring a compelling message and a robust digital/online campaign to cut through the noise on a crowded ballot with a growing electorate and limited volunteer involvement due to COVID.

In the end, Measure G passed – but HOW did Greenfield pull off a WIN going after its 3rd bond – and especially in 2020 when the pandemic was consuming lives and 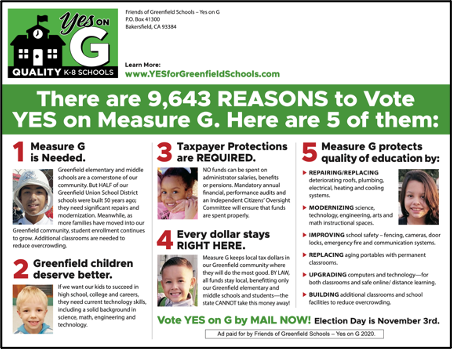 livelihoods across the state?  The secret sauce turned out to be a winning combination of things:  1) a compelling narrative – i.e. the right story, a story of NEED; 2) a super targeted “virtual” field campaign; and 3) a powerful direct mail program.  Campaign messaging focused on the need to upgrade aging school facilities to keep pace with student growth and advances in technology while also highlighting critical infrastructure upgrades to ensure students ability to learn in a safe environment (replacing lead pipes, roofs, and plumbing). To get this message out, CliffordMoss helped organize a small but dedicated group of volunteers to text and call thousands of GFUSD voters.  On a parallel track, CliffordMoss produced direct mailers and online banner ads highlighting District needs and the benefits of passing Measure G.

With aggressive text/phone banking, direct mail, and online messaging, the YES on G Campaign earned an AMAZING 68% WIN on Election Day and was the only school bond in Kern County to pass!