Like many cities in California, the City of Lodi in 2018 was facing a fiscal crisis due to spiraling public employee pension costs. The City was responsible for paying its pension bills, but that huge and growing obligation was now threatening the City’s ability to provide basic services to its community – things like neighborhood police patrols, road repair, and help in an emergency.  The situation had grown so bad that some services were at risk of being eliminated altogether.

The City had attempted to solve the problem with two previous ballot measures on the November 2016 ballot, Measures R and S.  Both were narrowly defeated, the latter by just 13 votes. Still, the City’s problems were not going away.   By early 2018 city leaders heard about CliffordMoss from a nearby community – and reached out to get our help.  What started as a conversation soon grew into a robust research, assessment and community engagement program to prepare the community for a new WINNABLE ballot measure.

We started by LISTENING to the Lodi community to better understand resident needs, wants and willingness to consider supporting a future revenue measure. We then used insights gained to build a story that was accurate AND in alignment with Lodi voters.  We told the story via mailers to residents, in opinion leader conversations and stakeholder meetings, and with a user-friendly survey asking for community input, which received more than 1,500 responses from Lodi residents. The feedback received during this process confirmed that the public education initiative had in fact worked; passing a new measure on the November 2018 ballot calling for a half-cent sales tax increase was indeed feasible despite the possibility of an opposition campaign.  Armed with that knowledge we worked with the City to build a ballot proposal that Lodi voters could support, and we went to the ballot with “Measure L”.

Not surprisingly, the “No on L” campaign began almost as soon as Measure L was placed on the ballot. A small group of taxpayers began spreading false information about Measure L, calling it a “Pension Rescue Tax.” It was important in this situation to navigate the waters deliberately, and CliffordMoss (with input from campaign leaders) developed a strategy to navigate exactly how to talk about Measure L with stakeholders and tell the City’s story of NEED.  The goal would be to keep the emphasis on the fact that pensions would get paid regardless and that this effort was about whether or not there would be any money left over after pensions were paid for the City to provide the services its residents wanted – and needed.

campaign to victory using a simple but effective strategy: hard-hitting persuasive messaging and a relentless and highly targeted voter contact program.   We accurately spelled out the NEED for Measure L including what the impact would be without its passage, laser-focused on that course, shining our “spotlight” directly and continuously on the need to maintain key city services, thus diverting attention from the opposition message.  In the end, the strategy worked.  Measure L passed with 56.9% support, averting the City’s escalating financial crisis and preserving resources for much needed vital city services.

The Measure L campaign was far from easy, but a winning strategy and a unified campaign team got the job done.  What can be learned from the successful Measure L effort?

Every army needs great leadership, and this campaign was no exception.  A huge portion of the success of Measure L came down to Campaign Leadership.  Long before we hit the campaign battlefield, CliffordMoss and City leaders teamed up to identify quality leaders.  In this case, a meticulous investment was made to find the right leaders – people with leadership qualities but without personal agendas, folks who were completely loyal to Lodi’s best interests, people with a deep history in the community, vast connections and the highest levels of integrity and credibility.  Beyond the two campaign co-chairs, deliberate attention was also given to building a robust campaign committee that truly reflected Lodi.  This would ensure alignment with the greater “voice of Lodi” as well as a broad number of recognizable messengers that would be needed (and ready) to reach out to and engage different kinds of voters.  In the end, this made garnering support from the entire community easier than it would have otherwise been.

The Measure L campaign co-chairs were a realtor well connected in Lodi opinion leader circles, who was able to secure the key endorsement and financial contribution of the Realtors’ Association, as well as an agricultural business leader, who was able to gather key support from local farmers and growers. The committee also included an individual who owned a print shop and donated signage to the campaign, a senior advocate with deep connections to the senior centers and retiree communities around town, city leaders with a deep knowledge of the history and fabric of Lodi, and a Chamber of Commerce member with business connections throughout town.   Lastly and critically important to Measure L’s success, the campaign was fueled by Lodi’s local firefighting union, Local 1225, which helped build the volunteer army that provided “boots on the ground” to complete the essential-to-winning grassroots, door-to-door voter contact work.   Because these individuals were deeply invested in passing Measure L for their city, and because they were already trained in grassroots campaigning, they became one of our most successful “secret weapons” to overcome the opposition and pass Measure L with a comfortable 6-point margin.

The conservative values that run deep in Lodi made it necessary to provide real evidence of broad support for Measure L. To do this, the campaign team relied heavily on both the work and the words of campaign volunteers and supporters who were viewed as positive messengers by the community.

The Lodi Professional Firefighters Association (Local 1225) was Measure L’s biggest supporter. Without the firefighters, Measure L would have lost.  Happily, they were already trained!  As soon as the campaign was established, Local 1225 made a significant financial contribution to the YES campaign.  But that was just the beginning.  Off-duty firefighters staffed phone banks, donated and printed their own literature, and dropped nearly 10,000 door hangers at the homes of voters throughout Lodi.  As members of a trusted organization dedicated to keeping Lodi residents safe, the firefighters were able to quickly establish a rapport with the public as they worked to contact voters both over the phones and at the doors, and their positive conversations with hundreds of voters helped push Measure L over the finish line.

Another vital Measure L supporter was Tracy Williams, President and CEO of the local LOEL Senior Center and a member of the local police foundation board. A well-known advocate for Lodi’s seniors, Ms. Williams was a crucial featured endorser of Measure L. In addition to signing onto the Argument in Favor that was filed with the Registrar of Voters’ office, Ms. Williams’ endorsement was featured in the door hanger that was dropped by volunteers from Local 1225, and she recorded a robocall to remind voters about the election in the days leading up to November 6. Her connections in the senior community were vital to ensuring that SENIORS, who are often the most consistent voters but whom are often also living on fixed incomes, understood the purpose of Measure L and why it was so important to vote YES.

Lastly, Measure L’s third key supporter was Lodi Mayor Alan Nakanishi.  Mayor Nakanishi had long been a trusted conservative voice in Lodi, and he had never before supported any tax measure anywhere.   But Mayor Nakanishi understood the importance of passing Measure L and the absolutely essential city services that were on the chopping block if the measure didn’t pass. For the first time, the mayor publicly endorsed a sales-tax measure in lending his name to Measure L.   CliffordMoss encouraged the campaign to emphasize this endorsement as much as possible, sending out a mailer focused specifically on the mayor’s support and highlighting his endorsement in opinion pieces and other printed materials.   This singular endorsement attracted critically needed voter support, especially from conservatives concluding that “…if Mayor Nakanishi supports Measure L, it must be ok!”    Bottom line:  Mayor Nakanishi’s voice made a difference when all the votes were counted. 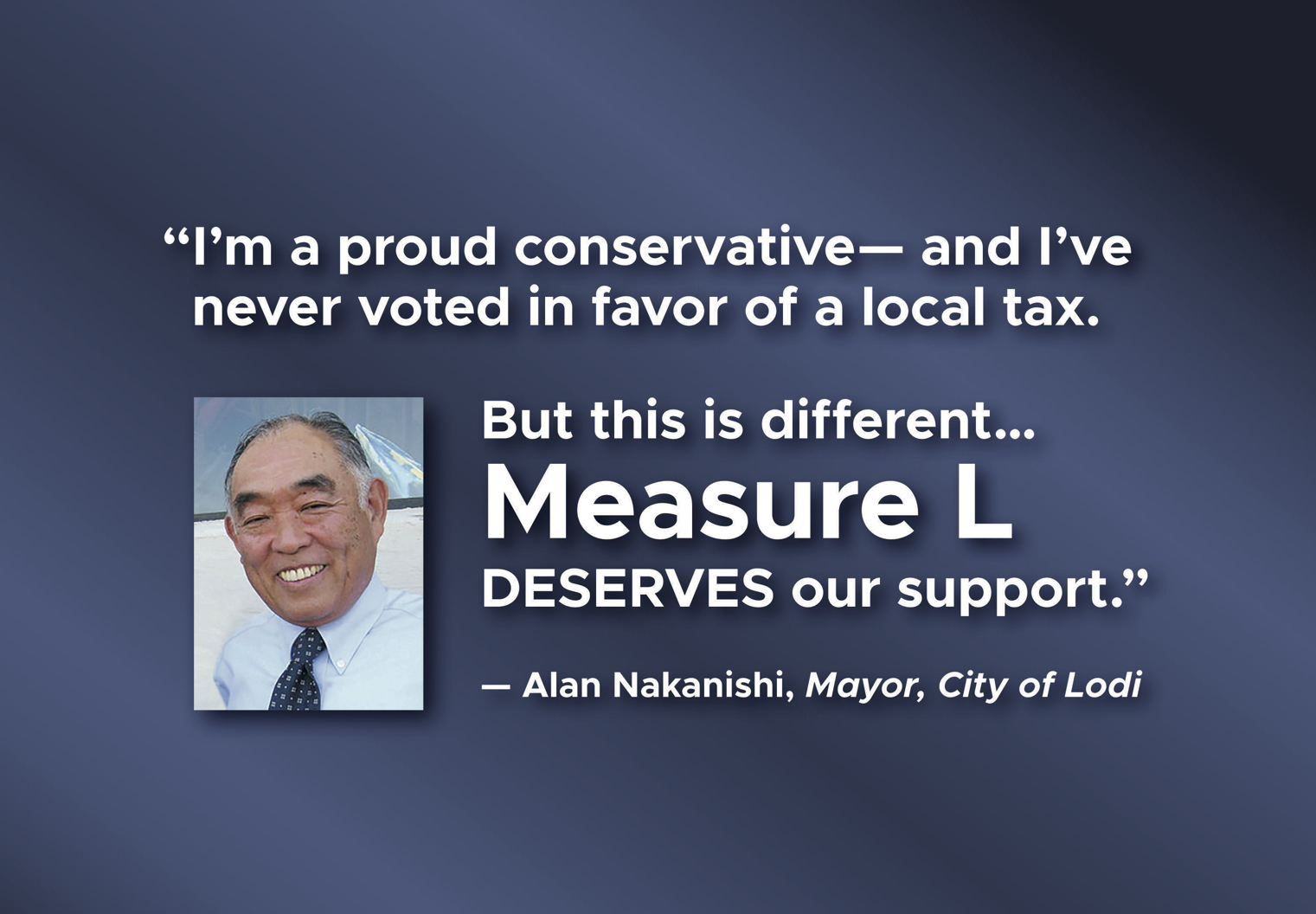 Previous campaigns in Lodi had been limited in scope, with little attention paid to engaging in real conversations with VOTERS. At CliffordMoss, we prioritize these conversations over less targeted forms of communication, such as public advertisements or editorials.  Interestingly,  recent campaigns in Lodi had not focused on this level of direct communication.  Nevertheless, with CliffordMoss’ strong recommendation and guidance, the campaign team organized a robust program of direct voter contact, reaching out to REAL VOTERS via phone banks, precinct walks, and direct face-to-face conversations throughout the city.  All told, the Measure L team was able to directly contact thousands of voters, engaging in real conversations encouraging voters to vote yes on Measure L.  Other forms of communication did not allow for the back-and-forth discussion that ultimately became so important to winning this election.   Our robust voter contact approach was a real eye-opener for many Lodi campaign leaders.  However, by Election Day, the campaign team agreed that direct conversations with Lodi voters had given  them the competitive edge they needed to WIN. 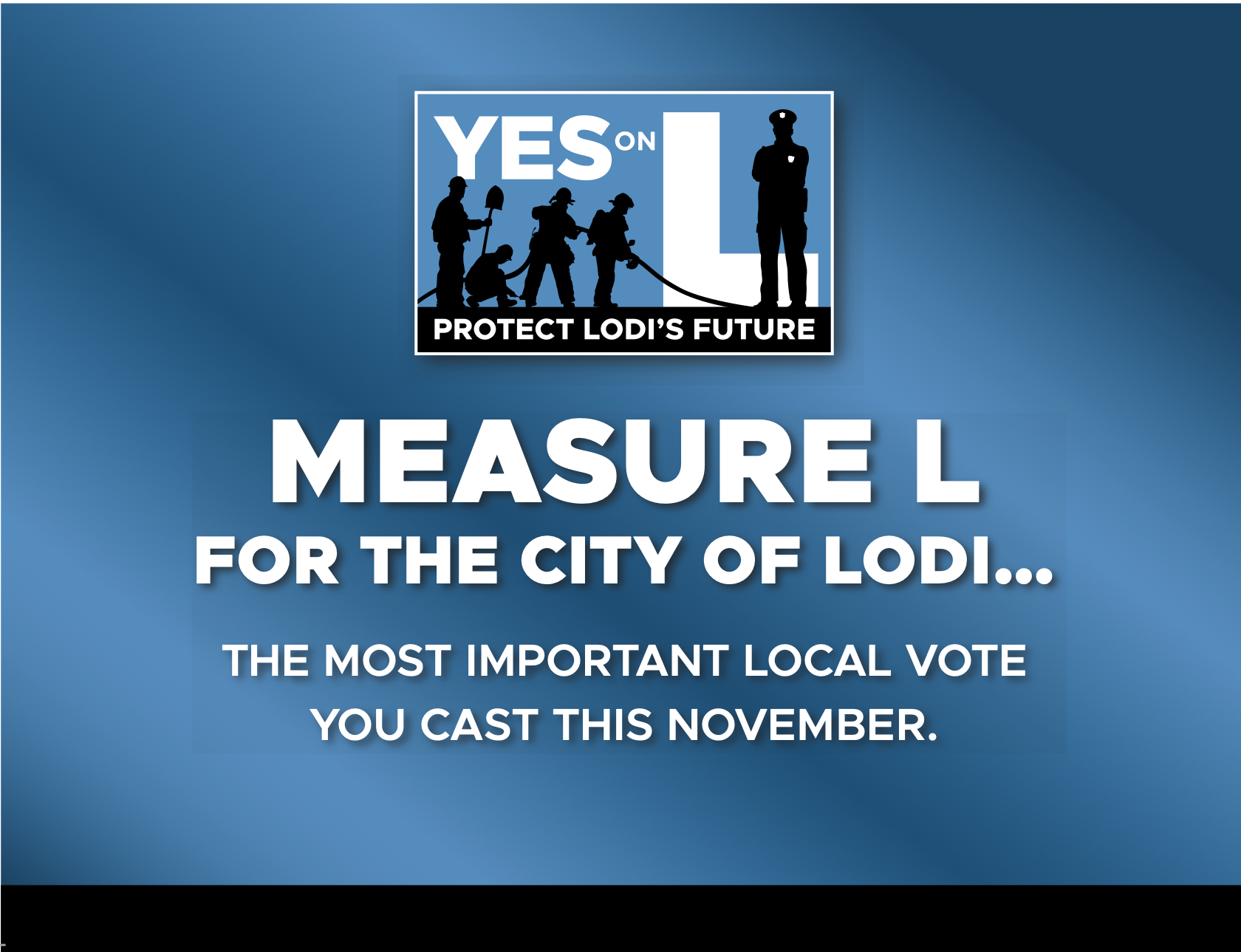 Lesson #4:  Stay FOCUSED!  Resist distractions and temptation to get into it with opponents! 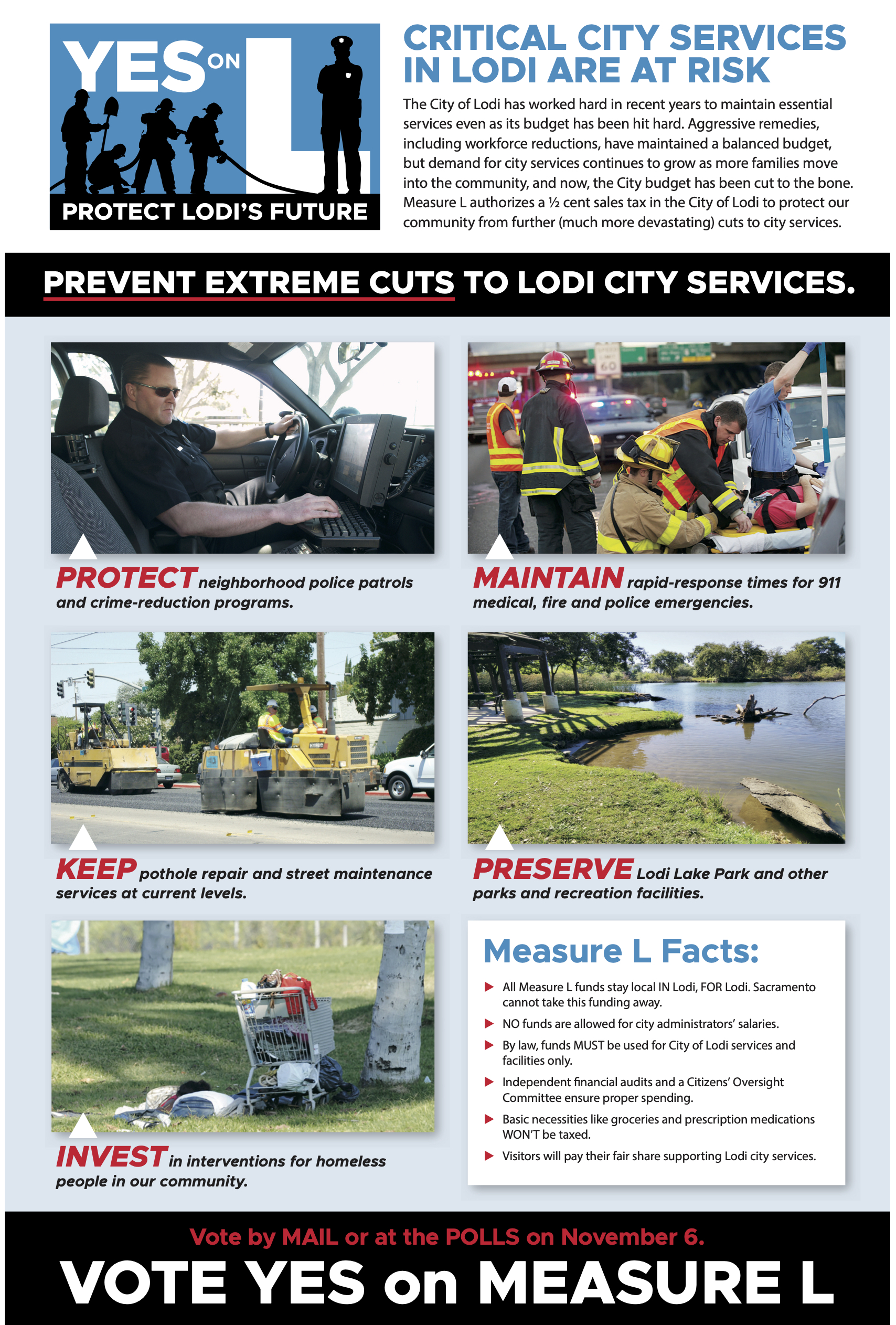 throughout the campaign, particularly for the opposition. Opponents called theMeasure L proposal a “Pension Rescue Tax” that would go directly toward paying public employee pensions instead of supplying the city services it said it would. The pensions had been a festering issue over the months leading up to the election, so this argument was able to gain some traction in the community, particularly with conservatives.

Rather than getting sucked into opposition arguments, which would keep the focus on their issue - the pension issue - CliffordMoss and the campaign team kept the focus on NEED, specifically the NEED for maintenance of basic city services.  By emphasizing that the pension bill would be paid no matter what, and that the real issue with Measure L was about whether there would anything left over after the pension bills were paid to provide the city services Lodi residents really needed and valued, the conversation more often left voters wondering what would happen to their city if Measure L didn’t pass.   Making sure we stayed on OUR message rather than straying into the opponents’ message ended up being critical to winning.

As we reflect back on Measure L, THIS campaign was again, far from easy, but a unified campaign committee working together, staying focused on doing what it takes to WIN, got job done.  Success was driven by understanding the uniqueness of the Lodi community, letting data tell us where we needed to go, employing a persuasive messaging strategy focusing on NEED over cost or other opposition distractions, staying on MESSAGE, employing and a relentless voter contact program driven by an awesome campaign team ….these were the assets that led Measure L to victory – and helped usher in a new era of fiscal stability for the City of Lodi.