Looking for a long-term budget fix?  It can be done – just ask Santa Cruz City Schools (SCCS). The District’s multiple parcel taxes with multiple renewal dates provide vital funding for K-12 programs, but in the past, they also demanded an almost year-around effort to prepare for “the next renewal.”  However, following a few proven steps, SCCS won big in a way that truly improved their financial future.

As a basic-aid district, SCCS has been chronically underfunded by the state. For years, the District’s only option to protect the local quality of education was 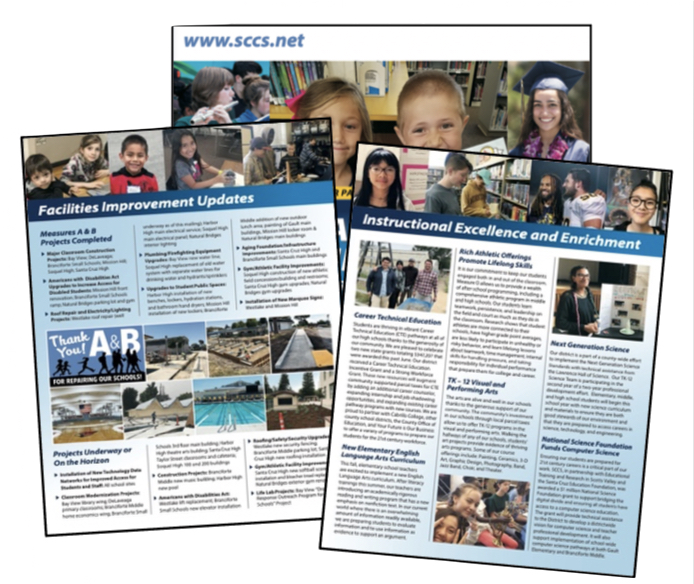 to repeatedly ask its community to approve local parcel taxes.  In fact, SCCS had gone to voters time and again with critical funding initiatives (bond and parcel tax measures) asking for support – and getting it.  But over time this strategy had taken a toll. The District’s multiple parcel taxes with multiple renewal dates grew to demand almost a year-round effort to prepare for “the next renewal.”  What District leaders really needed was a way to make these revenue streams permanent. Led by a visionary superintendent, they pivoted to a new path with a long view: adding more community engagement during the political “off-season”.  Among many things, they produced a stand-out annual report mailer highlighting how SCCS schools were thriving.  The annual report also provided updates on instruction, bond projects and parcel tax-funded programs. With positive feedback, the District took their success stories to broader and broader audiences, and as they did, SCCS laid a foundation of trust with the community that helped pave the way to a better, brighter future.

The big rub in Santa Cruz was this: voters were paying multiple parcel taxes for varying SCCS programs, which all showed up in bulk (along with a SCCS school bond!) listed on local property tax bills, creating predictable angst among certain taxpayers, especially when property tax bills came due.  The new thinking for 2020 called for combining and simplifying these multiple funding streams – and extending them permanently with no-sunset clauses.  All of this would require a vote of the people fueled by a focused campaign that could win the hearts and minds of Santa Cruz area voters.  One measure would combine two parcel taxes serving high school programs, and a second measure would combine two other measures supporting the elementary programs.  As part of the due-diligence effort, a deep dive into the data showed that the new measure supporting elementary programs would require a small increase per parcel, per year while the high school measure combining, simplifying and extending its two measures could go to the ballot with no increase to its combined total.  Polling subsequently confirmed that with a well-run YES campaign, these newly structured measures could indeed surpass the 66.7% approval threshold and achieve the District’s strategic goals.  It was a risk worth taking (wisely supported by research and due diligence), especially given the community’s longstanding support of local schools and the prospect of locking in these vital revenue streams - and do it in perpetuity.

With a steep 66.7% threshold to clear, finding the right leadership to run an independent campaign that could lead the army to victory would be critical.  Quickly, candidates emerged, and a dynamic leadership duo was recruited to lead the way forward.   The duo consisted of a well-liked former mayor – a respected civic and business leader (who was also an SCCS parent) with connections across the Santa Cruz community – paired with  a savvy business leader (a parent of a recent SCCS graduate) with campaign finance experience to serve as campaign treasurer.  Armed with a wealth of knowledge about the community and local conditions, these two leaders were able to help recruit volunteers, raise funds from donors for vital campaign expenses, and collect endorsements and lawn sign requests to show widespread community support, among other critical tasks. Having these steady hands at the wheel allowed the rest of the small but mighty campaign to operate seamlessly in their own avenues around a central hub of focused activity, with the team at the center of it all effectively keeping tabs on all of the moving parts of the campaign.  This team proved once again, Leadership matters!

4. Be STRATEGIC Stretching Your Resources

The campaign leadership team worked hard with volunteers to raise campaign funds, but times were tough. Nevertheless, this campaign stepped up to the challenge. Without the funds to do everything they wanted, the leadership team deliberately stretched resources, using  inexpensive tools and channels wherever possible.  Simple postcards explained the purpose and goals of Measures T and U to voters.  Volunteers hand wrote thousands of notecards to community members, sent thousands of text messages, managed a campaign Facebook page and website, and placed hundreds of signs throughout the community.   This critical work, especially the real one-on-one conversations, helped voters understand what they were voting on and why it was so important to VOTE YES.  Needless to say, the SCCS campaign team absolutely shined through.  And they were relentless!  They didn’t stop working until polls closed on Election Night. Talk about resourceful!

When the results began to roll in on Election Night, March 3, 2020, many school funding measures throughout the state were failing in record numbers.  But not SCCS – they were WINNING BIG.  Yes on T&U volunteers left Election Night celebrating as both measures sailed to huge victory!  Measure T for high school programs passed with 74% support!  Measure U for elementary programs passed with 79.9% support!   These measures didn’t pass by accident – they won because of a deliberate set of steps taken over years of time to secure and grow temporary revenue streams into permanent lasting resources. It’s possible to capture that big brass ring!   Follow the SCCS playbook, use the proven tools in our CliffordMoss tool box, and discover what you can achieve!