In stark contrast to record numbers of losing school measures across the state on the March 2020 Ballot, San Carlos School District (SCSD) found success. Why did SCSD win and weather the storm when so many others failed? The answer is simple: it comes down to a story of NEED, a story told well, and an exceptional winning campaign.

SCSD is committed to providing an innovative and engaging learning experience that fosters the development of the whole child and maintains the high quality of local K-8 schools. Exceptional teachers, small class sizes, challenging instructional programs, dedicated parent volunteers, and outstanding science, math, art, and music programs have prepared generations of local children to succeed in high school, college, and careers. SCSD’s goal is to continue that proud tradition. However, the level of school funding provided by the State of California is one of the lowest in the nation, and the SCSD is one of the lowest funded in the State and in San Mateo County. Local funding is needed to fill in the gap.

The San Carlos community has generously supported San Carlos schools in the past, approving Measure P in May 2015.  However, as with most parcel taxes, Measure P was bound by a “sunset” clause; it was set to expire after the 2020-21 school year. SCSD leaders began work in 2019 to evaluate all instructional needs ahead of another possible renewal measure. Without the renewal of the Measure P funding and an increase through Measure N on the March 3rd ballot, some existing local school funding, about $2.2M, would expire and disappear from SCSD school budgets.  SCSD K-8 schools would have to make drastic cuts to academic programs, increase class sizes, and maintain only basics. 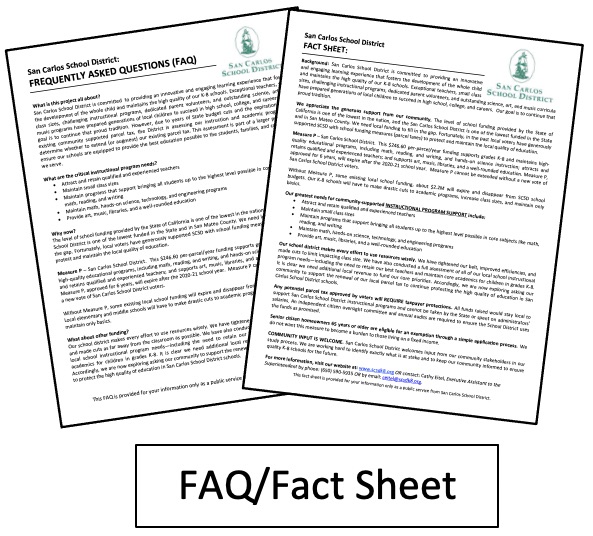 Figuring out just how much of an increase would be both feasible and impactful was the next challenge. CliffordMoss joined the cause and immediately began work on two tracks: 1) public opinion research, with CliffordMoss coordinating closely with a polling firm hired by the District, and; 2) a community engagement strategy that would allow SCSD leaders to engage their community, explain why the need was so great, and receive feedback on what voters would support.

The SCSD superintendent, district staff, and School Board began a thorough engagement process, hosting conversations with opinion leaders and meetings with important stakeholders all across the San Carlos community, including a well-attended public school board meeting to share information about the District’s financial situation. These conversations indicated that a renewal and increase was possible, but that the amount of that increase would be vital. The research poll showed that the best option was a moderate $88 per-year increase that also included an eight-year sunset. This amount wouldn’t solve all SCSD needs, and it would only be temporary, but it was enough to make a big difference over those eight years.  District leaders then voted to place the renewal and increase on the March 2020 ballot as Measure N.

There was still concern, as numerous neighboring school districts had gone to the ballot in recent years and watched their measures come up agonizingly short. Determined not to join that club, 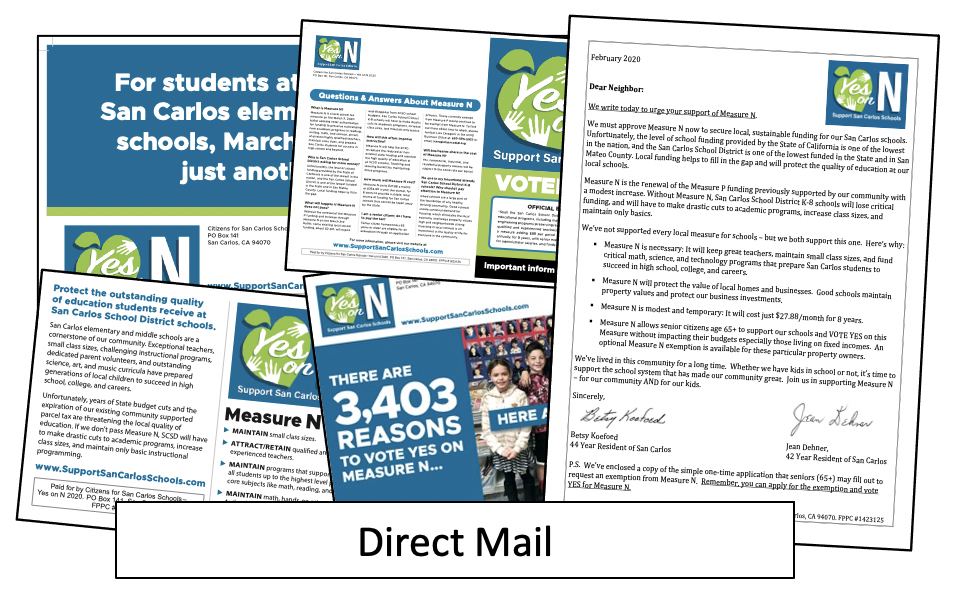 a dedicated army of volunteers came together to form a campaign team. They contracted with CliffordMoss and developed a precision campaign operation. The team raised the money needed to send out six distinct pieces of mail and gathered a volunteer army that executed a precision campaign including thousands of texts and phone calls, and door-to-door canvassing throughout San Carlos.

All of those efforts laid important groundwork for election success.  Each targeted activity spelled out in the simplest terms why Measure N was needed.  Meticulous, targeted, relentless campaigning made all the difference over time as the team navigated smartly to avoid stock market turbulence, a wild Presidential election primary and the beginnings of COVID-19, which together drove devastating losses for other school measures on the March 2020 ballot. Happily, this story ended differently.

Armed with a winning strategy, this exceptionally focused campaign team pushed Measure N over the top with a 70.97% WIN.