Woodbridge Fire District (WFD), a rural fire department in conservative San Joaquin County, had never, in nearly 80 years of service, asked its community to support a tax increase.  However, by 2018, tough times were calling for bold action.  Despite expanding its service area significantly over recent decades, inadequate funding levels had forced WFD to eliminate firefighter positions and periodically close a fire station (up to 40% of the time), increasing response times and putting residents at risk.  It was time to get the community involved in shaping the future.  District leaders engaged CliffordMoss to help in early 2020.  Less than a year later, WFD’s Measure U, a local parcel tax on the November 2020 ballot, passed with 73.43% support.

How did Woodbridge Fire District manage to pass a first-time parcel tax with over 73% support in conservative San Joaquin County?  Here’s how they did it:

1. They brought in expert help EARLY and did the work to build a ballot measure that could WIN.

Closing the funding gap wouldn’t be easy in a conservative community like Woodbridge.  To that end, the WFD fire chief did his homework and found  CliffordMoss in the process.  With support from WFD’s Governing Board, the CliffordMoss team went to work; joining us were a financial advisor and a public opinion research firm.  Working together with the District’s legal counsel, this was the team that helped build a ballot package that could win.  Our research, data work, and strategic assessment would help to identify in specific terms what a prudent, defensible, ballot measure for WFD would have to look like to clear the steep super-majority threshold needed to pass.  Everyone on the team (fire district AND consulting team) joined forces in the due diligence “lift”.  That early effort made a difference, laying the groundwork for future election success.

2. They reached out and LISTENED to get the community ready!

With feasibility work completed, WFD leaders pivoted to sharing their story of need with the public. Long before Election Day or even before a 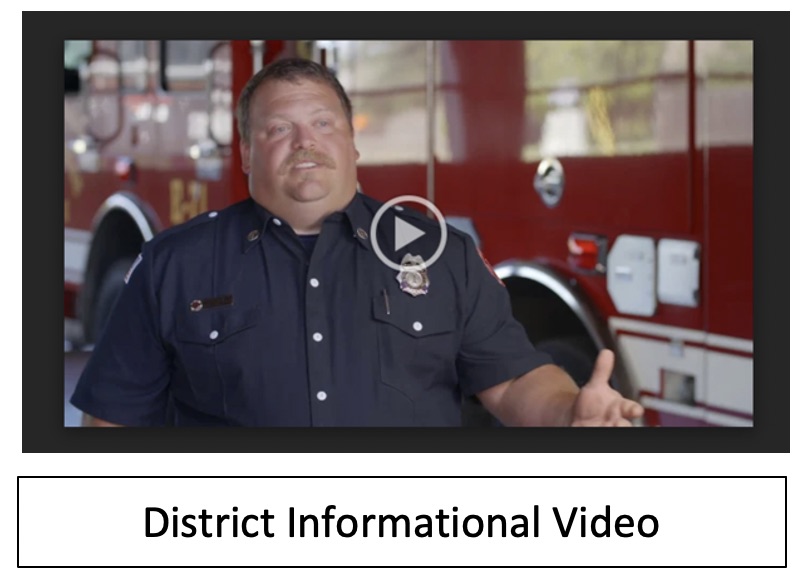 ballot measure had been finalized to go to the ballot, Fire District personnel provided information, answered questions, asked for input, and LISTENED. And LISTENED.  And LISTENED.  Over time, CliffordMoss helped the team hone their message (informed by research, community Q&A events, and other listening exercises).  Among the most effective story-telling tools was a brief informational video featuring real Woodbridge stories from real Woodbridge firefighters that were easy to recognize as “home grown.”  The video, shown on social media and online platforms, along with other customized communications, presented a clear and compelling story that resonated with local residents.  Voters in particular were able to consider this information, learn, and ask questions to fully understand what was at stake long before campaign season launched while time was still WFD’s friend.  Public input helped the District calibrate its final package to ensure passage at the ballot box.

3. When it came to campaign, they leveraged their best assets!

In Woodbridge, firefighters have a platinum gold reputation. Measure U leveraged that great advantage.  Even during the COVID-19 pandemic, residents appreciated seeing a (masked!) off-duty firefighter at their door,  volunteering to tell them about Measure U.  In fact, off-duty volunteers from the Association of Woodbridge Firefighters were the lifeblood of the YES on U campaign - knocking on doors,  making phone calls, hanging door hangers, posting signs, and so much more.  Together, they were “boots on the ground” and a force of nature.  With their help, by the time ballots arrived, nearly every voter had heard something positive about the reasons to vote yes on Measure U.

4. They mobilized others to help. 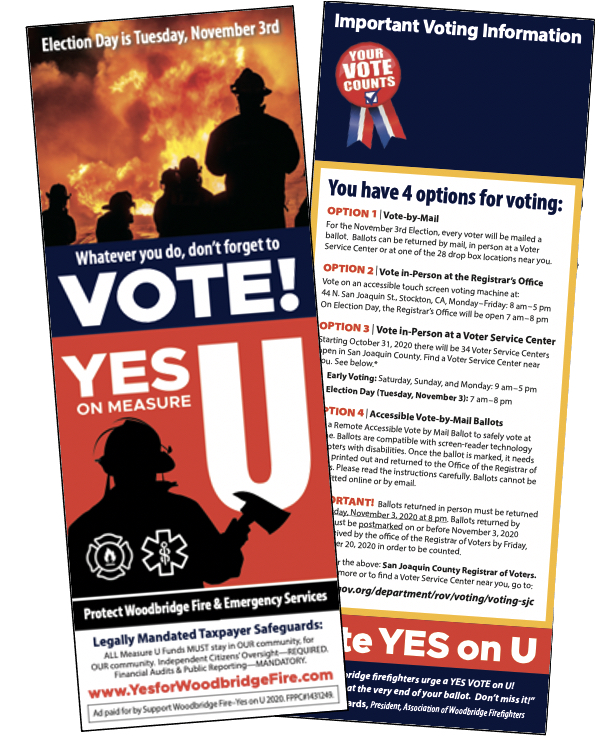 Activating third party support created additional and much-needed tailwind. Of particular note, a second video (this one funded by the campaign)  featured popular, well-known civic leaders from the community talking about the critical importance of rapid response emergency services and urged a YES vote on U.  Meanwhile, a different group of civic-minded volunteers wrote  hundreds of hand-written “VOTE YES” notecards to frequent voters.  Thanks to 3rd party supporters, the campaign was able to expand Measure U’s reach further and faster when it mattered most.

5. They worked tirelessly with unity of purpose until the very end!

Over the final 88-day election window, Yes on U volunteers worked day in and day out.  No stone was left unturned, no home left unattended.   Supporters were reminded again and again to follow through and VOTE.  When news circulated that a sign had fallen down, another was instantly posted to replace it.  Volunteers continued to beat the VOTE YES drum until the very end.  Once they moved into the 88-day election window, this campaign ran on a never-ending supply of renewable energy.  As one volunteer put it, “Let’s keep working.  We can sleep AFTER Election Day!”

The end result:  with no previous experience passing a tax measure in this rural, conservative community, the WFD team put a unified effort together that delivered.  Measure U passed with a whopping 73.43% support, ringing in a new era of stable funding for local fire and emergency medical services in the greater Woodbridge area.  CliffordMoss was proud to provide strategic guidance to this team.   They did it once, did it right, and they got it done, proving once again: where there’s a will, there’s usually a way!  You just have to find it!

Can we help you forge a path to a more secure financial future?  Contact CliffordMoss today to learn more.