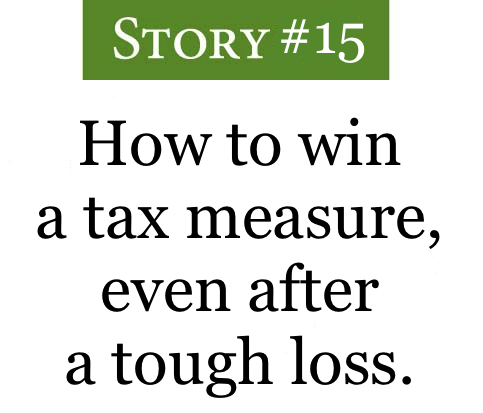 Ballot box losses are often a major blow to a school district and community.   People work hard to pass a measure.  When it doesn’t win they are often sad, defeated and sometimes angry.

These feelings are normal.  But a loss doesn’t mean you should give up.  A growing number of communities have been able to bounce back from defeat and win — many in a short period of time after the loss.

What is the trick?  There is no one right answer.  That said, a recent parcel tax win in Santa Clara – a 73% victory for Measure A and Santa Clara Unified Schools – offers some important clues.

In November 2009, the Santa Clara Unified School District placed a parcel tax measure on the ballot.  The District performed all the “right” functions – it polled the measure, hired a political consultant and carefully drafted ballot language and arguments to achieve resonance with voters.  A private campaign was waged to support the measure – volunteers made phone calls and knocked on doors, the campaign sent mailers and the community was rallied – but the measure lost.  It garnered only 63% when two-thirds approval was required.

In 2011, the District decided to try again.  It polled, hired a political consultant (a different firm than the one used for the 2009 measure), carefully drafted ballot language and funds were raised for a full campaign.  This time, on May 8 2012, the measure won with 73% of the vote.

What explains the difference?

Tom Clifford and Bonnie Moss started with the District in 2011.  Brought in to analyze the District’s prospects for a parcel tax measure in 2012, we quickly recognized that our first step was to diagnose what happened in 2009.  Losing campaigns tend to sweep the experience under the rug, as though it never happened.  That is a mistake.  By diagnosing the 2009 effort we learned that though the District and campaign efforts were robust, they were flawed.

There were at least two significant problems.  First, the 2009 pre-electoral phase was rushed.  The District hurried the measure to the ballot and did not take the time calibrate the right tax rate and message or to consider a different election date or method.  Second, the pre-electoral work to prepare the District for the ballot was limited.  Nobody reached out to teachers, staff, parents and other stakeholders to bring them on board and make them part of the team.

Key Learning:  TAKE THE TIME to properly assess your situation and prepare a measure that is aligned with your community.  Time is the most valuable resource you have.

Armed with the two key problems identified in the diagnosis, we set out to remedy them.  The District and political team met with teacher, staff, parents, administrators, business, retiree and other groups to bring them on board.  A number of these stakeholder groups (teachers and staff) were involved in shaping the poll, ballot text and ballot argument.  This exercise brought all the parties together early and ensured that all were invested in the outcome of the measure.

Key Learning:  people support what they help create.  Engage EARLY.  This is critical step in turning from a loss to a win.  You must identify all key parties at the table in the loss and make sure they stay at the table.  You must also key in on parties who did not assist in the losing campaign but should have, and work with them early and often to make sure they are a part of the next effort.

Clifford Moss worked closely with a partner polling firm to develop the right survey instrument for the District.  Each District is unique; the poll must reflect that fact.  We tested arguments specific to the locale, we also tested negatives (arguments against) connected to the specifics of Santa Clara.  Perhaps most importantly, we polled a slightly larger sample size (n=500, not n=400) so that we could test with accuracy the impact that the date of the election would have on outcome.  Through this we learned that there was not a substantial difference in support for a parcel tax in May special election, June Primary or November general scenario.  Having this information drove our strategy of a May all-mail-ballot election.

Key Learning:  review the polling and key decisions it drove in the losing effort.  Did you properly assess multiple election dates and scenarios?  Did you adequately test tax rate sensitivity?  Did you thoroughly examine your weaknesses?  Was your messaging consistent?  Make sure the polling for your next effort is better.

After the poll was completed and presented to the Board, we went back to each group to discuss the findings, the District budget problems and to begin discussion around tax rate, best arguments and putting together a campaign team.  Parents, teachers, staff and administrators showed up at school board meetings to demonstrate to that a consensus was growing at that the community was election ready.

When the Board took up the resolution to put the measure on the ballot – we did not have consensus after the first vote.  Sensing the importance of a 7-0 vote, not a split, we tinkered with the plan and ballot language during the conclusive board meeting to ensure a unanimous vote.  Consensus is not mandatory for winning a measure, but it sure helps.

Once the polling was complete and the Board voted to place a measure on the ballot, the District rolled out a dedicated effort to get to nearly 30 school sites with a town-hall meeting on the budget at each site.  These presentations were also given to community groups and members of the public.  This was a committed public communication effort intended to demonstrate to the public that without Measure A, the District would need to cut core programs (libraries, math and science classes and some teaching and staff positions).

At the same time the District was engaged in the public communication effort, a volunteer group, led by Clifford Moss, was quietly putting together a private campaign.  Fundraising, endorsements, campaign infrastructure and volunteer recruitment were underway long before the campaign began.  Campaign architecture, including who would chair the campaign, who would manage day-to-day, teacher, staff, parent and administrative liaisons were locked in and a schedule was created to ensure a steady flow of volunteers.

Key Learning:  move the campaign piece forward as fast as possible as the District role is phasing out.  It is critical to have campaign roles assigned and people working early – before calls are made or doors are knocked.

Once the measure is placed on the ballot, the driving force behind the measure shifts from the district to a volunteer led effort.  Indeed, by law, District funds cannot be spent on campaigning.

This is a challenging time for a revenue measure.  One of the key differences between the 2009 and 2012 Santa Clara efforts was the seamlessness with which the District effort transitioned to a volunteer campaign.   District staff as volunteers and the campaign consulting team must make every effort to ensure this smooth transition.

Also critical is a clear strategy and path to victory.   In 2009, the Santa Clara effort mustered support, but the strategy and execution was muddy.  In 2012, the campaign plan and team was clear from the beginning, everyone was on the same page and all were working towards a single shared goal.

Step 7:  Discipline through the finish line

Campaigns are generally 10-15 week sprints, but often they can feel like a lifetime.  Part of the leadership that the committee and consultant must provide is a continued hunger to work harder as time runs out.  The natural reaction is typically the opposite; as the campaign settles in, the work become rote and people start “doing” just to do.  This is a danger to any campaign.  Leaders must work hard to keep volunteers motivated AND thinking hard about the final prize — a win.   Campaign leadership must be nimble and willing to constantly assess the campaign and make adjustments whenever needed.